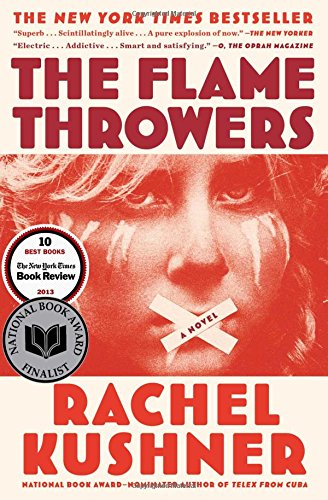 NATIONAL BOOK AWARD FINALIST NAMED ONE OF THE TEN BEST BOOKS OF 2013 BY THE NEW YORK TIMES BOOK REVIEW
New York magazines number one book of the year and named a Best Book of 2013 by The Wall Street Journal; Vogue; O, The Oprah Magazine; Los Angeles Times; The San Francisco Chronicle; The New Yorker; Time; Flavorwire; Salon; Slate; The Daily Beast; Bookish; The Jewish Daily Forward; The Austin American-Statesman; Complex; and The Millions, Rachel Kushners The Flamethrowers was a finalist for the National Book Award and a New York Times bestseller. Includes a new essay by the author, with a folio of images.

Reno, so-called because of the place of her birth, comes to New York intent on turning her fascination with motorcycles and speed into art. Her arrival coincides with an explosion of activityartists colonize a deserted and industrial SoHo, stage actions in the East Village, blur the line between life and art. Reno is submitted to a sentimental education of sortsby dreamers, poseurs, and raconteurs in New York and by radicals in Italy, where she goes with her lover to meet his estranged and formidable family. Ardent, vulnerable, and bold, Reno is a fiercely memorable observer, superbly realized by Rachel Kushner.